Palletways, Europe’s largest and fastest growing express palletised freight network, has welcomed 36 new members over the past 12 months to serve its growing customer base to move pallets across 20 countries.

The company’s’ members are responsible for moving over 10 million pallets each year and together serve around 50,000 customers around the continent. At the start of 2017, Palletways had 320 members, whereas today there are over 350 – an all-time record for the network.

Luis Zubialde, Chief Operating Officer of Palletways Group, said: “The strength and growth of our membership is a crucial part of the Palletways success story. As we gain more members, our service coverage for customers improves, we create opportunities for economies of scale and provide better value for money for the customer. The Palletways family across Europe welcomes our most recent members and continues to thank our existing team for their dedication and hard work.”

Increasing coverage in the UK

The UK comprised of 11 of the new members covering postcodes from Carlisle to Brighton to Newport. Transol Logisitics, a rapidly growing Coventry-based haulage operator is one of the newest editions. The company boasts a 75-strong team and has a fleet of over 60 vehicles. Over the past six years, Transol has expanded into general haulage and international time critical logistics for the automotive and aerospace industry and now has offices in Poland and across the UK.

Norfolk-based Foulger Transport, has also joined the Palletways network in the last financial year. The leading haulage operator are part of Kinaxia Logistics, based at The Circuit in Snetterton and boasts a 250-strong team with a fleet of 104 vehicles. The company was formed in 1935 and provides cost-effective, efficient warehousing, haulage and order fulfilment throughout East Anglia, as well as UK and international distribution.

Rob Gittins, managing director for the Palletways UK, said: “Recruitment and retention of the best hauliers in the business is a core part of our activity. We’ve taken steps to make sure our support package for members is as attractive as possible. Each member has access to dedicated support managers as well as assistance from marketing, service excellence professionals and of course our wide range of industry leading IT.

“We’re delighted to welcome the recent additions to our network and look forward to them being part of the Palletways success story for many years to come.”

Within the European network 25 new members have joined in the last year representing a significant period of growth.

Palletways Italia has rapidly increased its coverage, with 17 new members joining the network in the past 12 months. One of which is CDR Para Trasporti who joined in July 2017 to cover Parma city and its surround area. The company has been operating in the freight transport and logistics sector for 20 years and provides tailored-made logistics services to meet customer needs.

Palletways Germany has expanded its network with five new members covering regions in the north, west and south of the country. In several post codes, the new members will mean a reduction in pick-up times from 48 to 24 hours.

BMK Spedition + Logistik is based in Worms and is one of three new members to serve south west Germany. Founded in 1994, the company employs around 20 people and its services range from land, air and sea transport to warehouse logistics, supply chain control and contract logistics. Another new member, Logistics Transport Solutions (LTS) with its headquarters in Stuttgart, is the system depot partner of Palletways, supplying the metropolitan region of Stuttgart which is the most important logistical area in the Baden-Württemberg state.

Finally, three new members have also joined Palletways Iberia over the past 12 months with a total of seven new members since June 2015.

One of these new members is Portuguese logistic company Moldtrans Group who have two hubs in Porto and Lisbon. Founded in 1979, the company has 5000m² of warehouse space throughout Portugal. Another new member joining the network is Actividades Logísticas Centralizadas (ACL) who will increase coverage in the Madrid region. ALC was founded 18 years ago as a family company providing regional transport and storage, for the food sector. The company now offers a complete range of logistics services, both nationally and internationally. 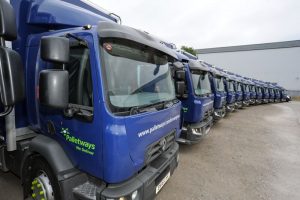